i thank my God in all my remembrance of you, dear readers,

Formal letters are rapidly fading from usage in our ultra-connected around-the-clock society. The format has drifted first to the succinct email and then to the acronym-rich twitter and now the thumbs-up emoji text. The Victorians, the literacy craving letter-writing crowd of the steamship and world exploration era often concluded their missives with the poignant, “i remain…” 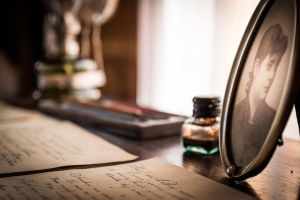 St. Paul gave about two-thirds of the New Testament in the form of letters to the churches that he founded. A consummate world traveling Apostle he traveled the much of the then known-world with the Good News of the risen Lord. His familiar ancient world greeting begins each of his epistles, including the beloved letter to the church at Philippi.

In Philippians 1:21 he begins, ” For to me to live is Christ, and to die is gain..But to remain in the flesh is more necessary”

As i pondered today’s theme i was reminded of this passage, which was one of this past week’s epistle readings for some of us. After randomly picking up a book of Emily Bronte’s poems the book fell open to a poem that resonated with me.

Riches I hold in light esteem,
And Love I laugh to scorn;
And lust of fame was but a dream,
That vanished with the morn:

And if I pray, the only prayer
That moves my lips for me
Is, “Leave the heart that now I bear,
And give me liberty!”

Yes, as my swift days near their goal:
’Tis all that I implore;
In life and death a chainless soul,
With courage to endure.

My thoughts coalesced around the idea that we are fleeting pilgrims who will not long remain in this world. Rather than fear, this is our hope. Tomorrow will soon be here. i know not what form communication will take in the coming decades. i look forward with hope and anticipation. Technology is exciting, but it is not the keeper of my trust. Our lives are as fleeting as the single blink of a flashing cursor.