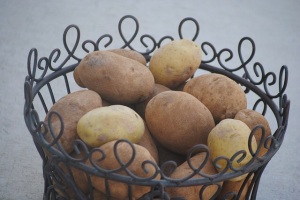 Potatoes are so ordinary to me. When I choose the topics for this series I was looking for commonplace items that I could reflect upon. Honestly, I was seeking things that most people would be very familiar with. This post is part of the series A Fresh Look @ Simple Things , for write 31 days 2015. If you want to see what others have to say about write31days check it out here.

Beauty is ordinary and infinite, like the humble potato.

John Keats famously said that, “A thing of beauty is a joy forever.” While this is true I think that beauty is forever illuminating. Just as I could wax poetical about cats and dogs endlessly, should I choose to do so, I think beauty is one of the great gifts of God that I am forever finding everywhere I look.

Ever since I read Ann Voskamp’s ground-breaking book One-Thousand Gifts I have deliberately searched for beauty. I find it often hidden in the most humble places.  In unexpected corners, forgotten by most, lies great beauty.

By keeping the micro vision in place with a macro view of life I find beauty hidden in plain sight.

I overlooked potatoes as a source of beauty most of my life. My father was a self-declared , “meat and potatoes” man. Other than an occasional serving of rice, potatoes were a mainstay for me growing up. Once I was old enough to handle a sharp knife safely I was expected to peel potatoes.

When I was growing up my parents had been married many years. I imagine my mother started off as a bride with a potato-peeler. By the time my peeling came along it was long-since broken and she peeled potatoes with a steak knife. As a cook, she was what she referred to as, ” an old-fashioned farm cook.” She came along at the end of a very large family and learmed to cook simply for a vast, usually unknown number of dinner guests.  She never lived on a farm, but her mother had grown up on a large farm. My mother learned to cook from her mother, so make-do was expected. I don’t think my mother ever gave potato-peelers a second thought. I mastered the skill of peeling with the steak knives and eventually learned to peel them with a bread knife as well. (Do NOT try this at home!)

I was an adult and found out that there existed a tool made just for peeling potatoes on TV cooking shows. I thought the potato-peeler ingenious at first. Eventually my potato-peeler broke and I received another. The second is not comfortable in my hand. I generally use a paring-knife. If I’m honest, I avoid peeling potatoes as much as possible and prefer using frozen, pre-peeled and diced potatoes ready to steam. After all it is the 21st century.

After a lifetime of peeling and eating potatoes I can not think of much that is more common. When I grew up my mother bought bags of ubiquitous potatoes. No matter if they were baked, parboiled, sliced, diced, made into potato-salad, mashed or otherwise, they all started out the same. I was astounded when I found out that potatoes come in many varieties. They are fascinating in complexity and have quite different tastes. I enjoy using different varieties now. The only difficulty lies in the fact that I cannot change my mind about the menu on Wednesday and mash fingerlings.

Falling into a rut is easy. This is especially true when we are in a hurry. As we try to multi-task with ever greater efficiency, we pay less attention to the small. Simplicity can be the antidote or it can fuel the problem. I would like to find really fresh bags of potatoes, just so I could be free to change the menu based on the changing schedule of the busy day. My mother kept it simple. She found no joy in potatoes, however. They were overlooked ingredients, not sources of beauty. That is how I viewed the potatoes most of my life.

In history I find a famous example. In Ireland the potato grew well in the climate and quickly was adopted as a major portion of the national diet.  They kept it simple by growing one variety. As the industry of grow potatoes flourished potatoes took over to become the entire diet of the poorer classes. When a blight arrived and the potato plants died they replanted the same variety again the next year as famine spread throughout the land. Innumerable people starved or immigrated because they simplified the potato growing too much. (Caveat, I know I have oversimplified the history and there were many political issues involved also. I take this liberty because this is a blog post and is meant to be small and quick to read.)

Potatoes can be simple. They are not without beauty for all the darkness they come from. They are tubers of great variety and usefulness. They are not awkward to peel, knobbly, brown things. They are a gift from God.

Brother Lawrence taught me to first see grace in the potato. If you have not read his marvelous, little book I heartily recommend, The Practice of the Presence of Christ. Assigned to kitchen duty, he was a monk who found the work tedious and exasperating. As he prayed he discovered that he could easily talk to God silently while he performed the repetitive kitchen chores. He became famous for his great peaceful disposition. He was eventually sent by his order to other monastaries to lecture on the peace obtained by continued prayer. Ultimately he wrote down his lecture and wrote a classic book on the faith life. It is the perfect antidote to life in our fast-paced world.