This has been a week of contrasts. It began with Palm Sunday. The day that Jesus rode into Jerusalem hailed as a king. “Hosanna, blessed is He who comes in the name of The Lord!” Acclaimed as a conquering hero, the Messiah, He came riding into town on a donkey. He did not ride the war-horse of a great general or leader but on a young donkey. It wasn’t quite what they had in mind.

My Palm Sunday wasn’t quite what I had anticipated either. I literally had to drag myself out of bed using every bit of self-control and will-power that I possessed, along with a good measure of grace. I did drag myself to Sunday School and Worship followed by a Resurrection Egg Hunt. That was not like me. Sunday morning has alway been one day of the week I can get up without too much trouble. Surprisingly I felt stronger at the end of the long day then I did when it began.

That is what Jesus has done. He turned the darkness into light. He converted our grief into joy. He healed our broken into beautiful. The week progressed along with a series of challenges. I witnessed beauty. I experienced pain. On Monday I spent a couple of hours on a lavish dinner of Coq au Vin, roasted new potatoes and French style green beans served with a cinnamon streusel coffee cake. By Good Friday dinner was a fried egg sandwich.

We endured deep freezes and warm sunny days. Grey days have been followed by a day where the crystalline clearness of the cerulean sky was matched only by the birds singing joyfully in branches high. Apple blossoms made it through the freeze, but the marvelous magnolias did not. Daffodils drooped low and were resurrected with the sun. The violets bloomed and I’ve had my first picked flowers of the season. What a week of contrasts I have witnessed. It is nothing like what Jesus endured. The crowds that cheered Him on Sunday were screaming, “Crucify him” on Friday. 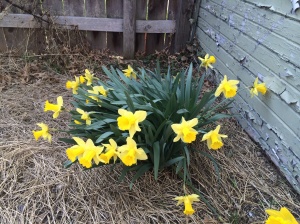 Good Friday is the day we remember what Jesus did. In taking upon Himself the worst the world could offer and by sacrificing himself he restored our broken world into its rightful place in His divine plan. He took our broken bits, the days that we have hardly climbed out of bed, and turned them into something beautiful. Because He willingly took on all that life and death could deal out, the beautiful, the glorious, the graceful, the ugly, the gruesome and the gory He made us grateful –grateful that He was able to accomplish what we could not do for ourselves.

We can live with gratitude in this beautiful world. He stopped at each step of creation and declared it good. Despite this we are not grateful as we ought to be. Rather, we focus on what we lack. We place our attention on the tragedy and the tantrums rather than the triumphs. The tree that was meant to break Him –He made beautiful. The cross was a symbol of torture, and through Him it became a symbol of strength.

Because of Good Friday we have been freed from the limitations that have been upon us since Adam and Eve first sinned in the garden. God who is infinite climbed into our lives and gave Himself up for us. The Incarnate became man, suffered and died that we might have eternal life! He secured for us a place with The Everlasting. Good Friday is good because in it we have been made into His likeness. On Easter Jesus has turned our brokenness into beauty.

One thought on “Brokenness into Beauty”