When I was growing up my family liked to go camping. Every weekend we could get away we packed up the camper and took off for one of the state parks. Our favorite park had a private beach for the campers and you could see the lake from your campsite. The closest park also had it’s attributes, the primary of these being proximity. I spent many happy weekends there as a kid. You could not get to the beach without a drive unfortunately. So the beach was saved for Sunday afternoon on our way home.

One Saturday I begged to go swimming. It was a hot and steamy afternoon and I longed to go to the beach. My father had no intention of disconnecting our utility hook-up, taking down our attached screen room and driving 15 minutes to the beach that day. He did however love his daughter and my pleading did get the best of him. He did one of the things I learned from him to do well. He improvised. He told me to get my swimsuit on and picked up a lawn chair to sit in. I took a lawn chair of my own and off we went…on foot.

There were hiking trails of various difficulties all over the parks we visited. Hiking the trails was our favorite pastime on those camping trips. He led me on to a familiar trail, and I asked why we were walking. He told me that we could get to the beach from where we were. A little way down the trail he took a left turn off the trail and into the brush. That part was not nice and I complained of the briars on my bare legs. Soon we were on another trail. And on and on. We criss-crossed from one trail to another trying to get through the woods to the lake.

I had not known you could walk to the lake this way, but my Dad said he could take me there from here. So, I followed. It seemed to be taking a long time, but just as I would begin to give up hope we could hear the sounds of kids splashing and people playing at the beach. Surely we were almost there. From one trail to another with cross-country jaunts between them forward we went.

Since we were carrying lawn chairs it made sense to stop and rest but we never sat down. My Dad led the way with his lawn chair in one hand and his ubiquitous walking stick in the other. I carried a lawn chair with coloring pad and colored pencils shoved down in the folded seat. It is odd in a way, we could have paused and taken in the scenery and made a day of it, but we were in such a hurry to get to the beach, we did not stop and take the view in.

At one point we were in a high pine forest and all was quiet, the scorching sun was no longer beating down upon us. I will always remember that forest. The cool, shade and the scent of the pine. I wanted to stop and rest, but no. “Just a little bit further”, my father replied. We did not stop. We walked on hiking trails. horse trails, service roads, non-roads. We went and went, yet still the beach was just out of reach.

Eventually we both knew that we weren’t going to get to the beach. We just wanted to get back to our camper and the rest of the family. “I guess you can’t get there from here.” my Dad finally acknowleged. We had caught sight of the lake so many times, heard the laughter from the beach but we could not reach the lake shore at all, much less the swimming beach.

We were both wearing thin soled canvas shoes, suitable for the beach but not hiking in the rocky woods. Our feet became so sore that we could not bear to walk on the gravel roads, or even the paved main road which we eventually came out on, far from the campsite. We walked in the grass along side the road, thankful it would finally lead us home.

When we reached the camper my mother and sister asked how the beach had been. We sighed. Daddy explained. I took a well earned nap.

The next day we stopped at the park office on the way home and got a map. Retracing where we had been we discovered that we had gone ten miles and completely circumnavigated the lake. The roads and trails all led alongside the lake, but none went to the lake. You could not get there from where we had been without a compass and good planning.

Our simple hike through the woods to the beach became legend in our family. We took no pictures, but I see it all vividly in memory. When I went looking for pictures of the lake in the old photo albums, I discovered to my dismay that the 30 year old photos have faded. Another of our favorite parks’ lodge was up for sale a few years ago. The years roll by, but memories still hold, even the scent of the pine forest.

I realize in remembering this episode that I never doubted my father’s ability as a guide. I followed him through thicket and trail, forded small streams without bridges and never looked back. I did complain some. The briars scratched my legs and I wanted to sit and rest in the forest. Still, I didn’t pester him and make a fuss. By the time I realized the beach was not accessible I was too tired to care.

Do I follow my Heavenly Father as well as I followed Daddy? I trust Him to lead me right. But I do a good bit of complaining sometimes. Life is a lot like a hike. It gets steep and rocky. There are briars and bugs. Sometimes the sun is too hot and sometimes it is just too cold. When we find a good place to rest, we are hurried on. This pilgrimage however, has one advantage. When God says we can get there from here He knows what He is talking about. 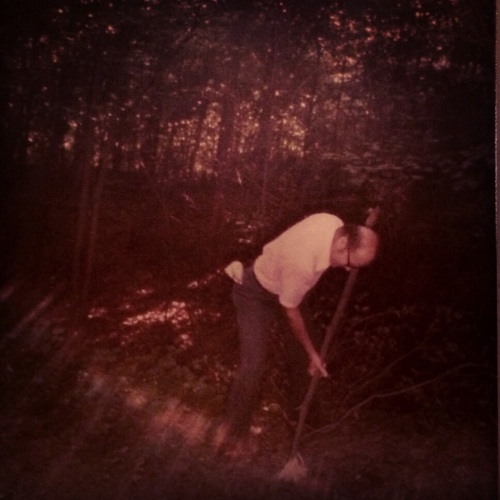